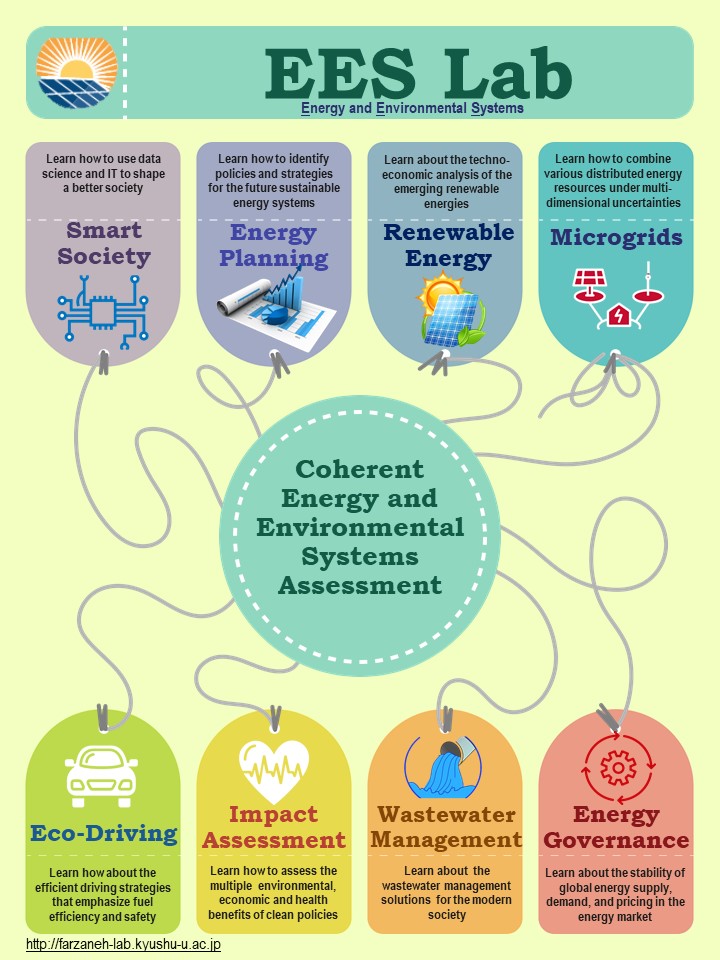 This research focuses on introducing a novel and low-cost control scheme which can be applied to a simple residential microgrid, consisting of a wind turbine, PV array, and battery storage. The main control layers of the model include the fuzzy logic controller used for MPPT of both the wind turbine and PV systems and a PI controller used to control both the battery charging and inverter of the system. This work is part of our current research activities on intelligent control methodologies and numerical optimization algorithms that are being developed atEES.

The primary purpose of this project is to outline the steps that would be involved in quantifying the co-benefits of solar energy projects as well as provide training materials and support training in Mongolia on co-benefits. This project aims at providing a review of appropriate formulas/methods for calculating co-benefits (Environmental-Economic- Health) of solar energy projects in Mongolia and presenting the co-benefits in manner that is easy to understand for policymakers.

Understanding the relationship between the benefits of LEDS in the major urban areas in Japan would serve as a good basis for the decision making, in particular in determining sectoral goals for limitation of GHG emissions growth or for setting absolute quantified goals for GHG emission reduction. The ten targeted cities which are evaluated in detail in this research are Tokyo, Yokohama, Osaka, Nagoya, Sapporo, Kobe, Kyoto, Fukuoka, Kawasaki, and Saitama. In the first phase of the research, activities will focus on evaluating the existing LEDS and clean energy policy developments, countermeasures and challenges in selected cities. In the second phase, activities will concentrate on designing strategic plans that achieve greater or border benefits in selected cities.

The primary purpose of this project is to outline the steps that would be involved in quantifying the  (environmental, public health, economic) co-benefits of two sets of model projects:

1) a heat only boiler project in Mongolia (only one with project scenario); and

There has been a recent understanding in the literature that the development, diffusion, and use of new technology are influenced by the establishment of Energy Technological Innovation Systems (ETIS) surrounding the technology in focus. ETIS emphasizes that innovation is a collective activity involving many actors and knowledge feedback and that innovation processes are influenced by their institutional settings, and corresponding incentive structures, including the market as well as government policy and all of the actors and processes, operate under conditions of uncertainty. In this investigation, we will attempt to capture and synthesize core elements from the existing literature to build an initial conceptual model of the low carbon energy innovation system which can be used in developing countries.

The primary focus of this research would be on developing better indicators and quantitative data as well as operational models and criteria to answer the following fundamental questions:

1) What is the most appropriate policy instrument for the diffusion of a particular low carbon energy innovation system in selected developing countries? The focus will be given to the energy efficiency improvement.

2) What resources are required, and what are the likely response times of the innovation system to policy interventions?

The targeted recipient country will be Indonesia as one the ASEAN developing countries since this country has aggressively utilized the mechanics of production networks extended by multinationals and has jump-started its industrialization processes. Japan will be selected as the technology sender country, since the government of Japan has already proposed the Joint Crediting Mechanism (JCM) as a means to facilitate the diffusion of leading low-carbon technologies, systems, and so forth in developing countries.

This research aims to develop and demonstrate a new strategic planning mechanism for achieving multiple benefits of Low Emission Development Strategies (LEDS) in Asia-Pacific cities, together with a robust analytical framework that can be used to assess those benefits during the development and implementation process. In this research:

1) We plan to develop a modeling framework in order to quantify the effect of LEDS on four main areas of energy systems, environment, public health and local economy at the city level;

3) We develop a strategic plan of the urban multiple benefits of LEDS based on the comparative analysis among the selected cities as the main output of this research.

The six global cities which are evaluated in detail in this research consists of: Tokyo, Sydney, Shanghai, Kuala Lumpur, Seoul and Delhi. In this research the focus would be on 'Buildings', 'Waste' and 'Transport' as the key sectors as they can offer substantial urban climate mitigation potential through the implementation of LEDS in the selected cities.


Clean energy scenario analysis in the city of Delhi

Funded by: Asia-Pacific Network (APN) and the Japan Society for the Promotion of Science, (2017-2019)

Modeling of thermal behavior of  the Organic Photovoltaic (OPV) greenhouse

The utilization of photovoltaic technology and integrated systems have led to the development of solar greenhouses. The interest of the developers and designers is now to seek new approaches to combine the electricity and food production optimally. Organic Photovoltaics (OPV) are an emerging technology currently being developed for large scale manufacture and with the potential to be scaled to production speeds of megawatts per day. Yet low efficiency of the technologies may limit their deployment in certain regions due to the large land areas that would be required. Although organic photovoltaics have received huge interest in the academic literature, there has been limited analysis of the application of the technology.

In this research, a micro-simulation model created in TRNSYS software was employed for the simulation of thermal energy use in an innovative solar greenhouse with organic photovoltaic system. The model makes it possible to determine both the energy and the humidity balances in a greenhouse.

Funded by: In collaboration with the graduate school of energy science, Kyoto University (2015-2018)

Climate change and energy security are global challenges requiring concerted attention and action by all of the world’s countries. Under these conditions, energy supplier and exporter countries in the Middle East region are experiencing further challenges, such as increasing domestic energy demand while energy exports have to concurrently be kept at high levels. Middle East countries process the largest proven oil and gas reserves in the world and contribute a large fraction of the world's CO2 emissions from the use of these as fuels both domestically and internationally. This research addresses different policies that could dramatically change the future course of the Middle East region towards a zero CO2 emission energy system. To this aim, an integrated energy supply-demand model has been developed to analyze required commitments include renewable energy and energy efficiency targets and the potential of nuclear power, all of which should need to be considered in order to reduce CO2 emissions by 2100.