Analysis of multi-dimensional interactions of flow of energy in the urban energy system is a complex task that necessitates the development and utilization of analytical tools. Development of analytical tools with high complexity is usually based on conclusions of many concepts and theories from different scientific disciplines. In order to be able to quantify the multiple benefits (Energy, Environment, Health and Economy) of the detected policies, we need to develop our methodological framework as shown in the following figure. 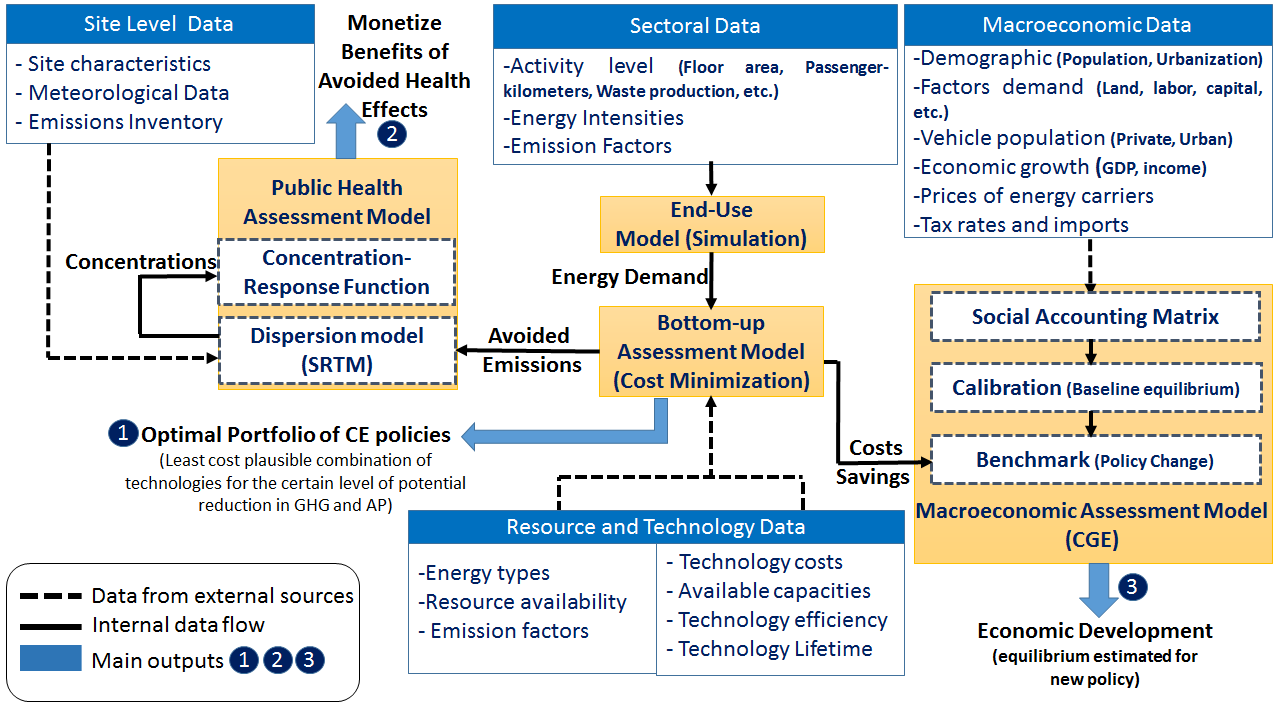 The integrated modeling framework consists of the following four sub-modes:

This model is a spreadsheet simulation model based on bottom-up End-Use method and the Avoid-Shift-Improve (A-S-I) approach, in order to assess the effect of different scenarios of socioeconomic, technological and demographic developments on energy consumption and emissions of the citywide energy system in a multi-sectoral context. The model systematically relates the greenhouse gas (GHG) and air pollution emissions based on the specific energy demand in the residential, commercial and service sectors in cities to the corresponding social, economic and technological factors that affect this demand. The nature and level of the demand for energy are a function of several determining factors, including population growth, number of inhabitants per dwelling, number of electrical appliances used in households, local priorities for the development of certain economic sectors, the evolution of the efficiency of certain types of equipment, penetration of new technologies or energy forms, etc. An understanding of these determining factors permits the evaluation of the various categories of energy demand for the urban energy system considered. The total energy demand for each end-use category is aggregated into three main “energy consumer” sectors: residential, commercial and service. Application of the tool is subject to the identification and estimation of the performance function of the urban energy system which is possible by segregating the whole energy system into incremental elements such as end-user, final energy, energy conversion and energy resources. When various energy forms, i.e. electricity, fossil fuels, etc., are competing for a given end-use category of energy demand, this demand is calculated first in terms of useful energy and then converted into final energy, taking into account market penetration and the efficiency of each alternative energy source and using new technologies. Demand for fossil fuels is therefore broken down in terms of coal, gas or oil and the substitution of fossil fuels by alternative “new” energy forms (i.e., solar, wind, etc.) is estimated, due to the importance of the structural changes in the urban energy system that these energy forms may be introduced in the future. Since these substitutions will be essentially determined by policy decisions, they are to be taken into account at the stage of formulating and writing the scenarios of development. The scenarios can be sub-divided into two categories:

In summary, the methodology comprises the following sequence of operations: 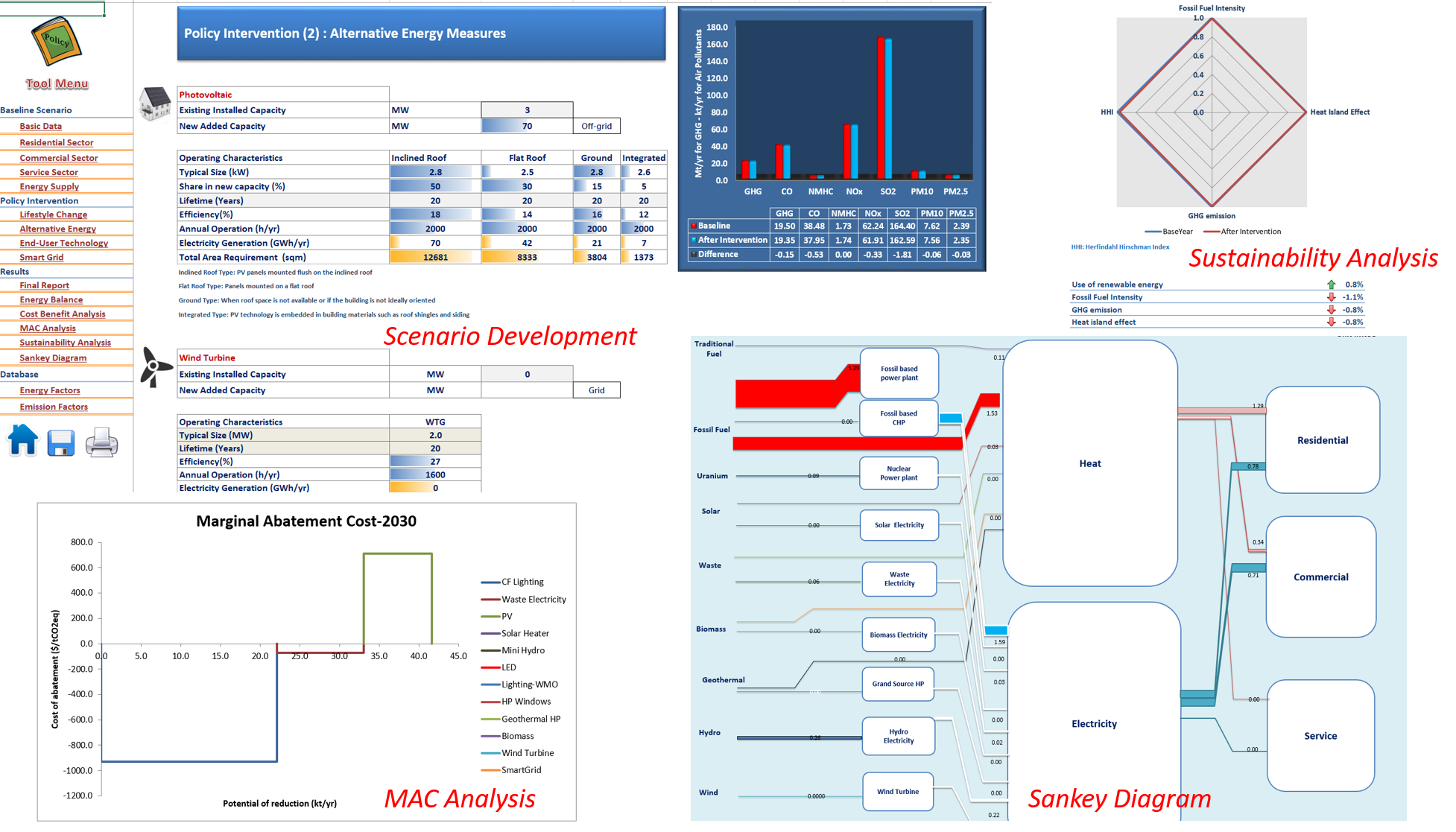 The microeconomic principles have been utilized to develop a model that would represent the behavior of an urban energy system in a market with a perfect competition. The local government as a decision maker in this market strives for maximum satisfaction (or utility) of delivering certain energy service to the end-users such as providing required electricity at the end-user level. The utility or satisfaction is a function of a broad range of parameters such as quality of the service, comfort, accessibility, environment, costs and time. Maximizing utility is subject to certain constraints due to the availability of resources. The resources are time, capital for obtaining a quality service, availability of reliable system environment and income. The solution of such a mathematical model would be possible if the utility function could be identified and formulated explicitly based on both supplier (local government) and consumers (end-users) viewpoints. An alternative methodology has been developed which may be categorized as a direct solution of the model. Although the solution of the model based on the maximization of the utility of delivering energy services would be hardly possible due to difficulty in obtaining an explicit formulation of the utility function, one may make an effort of solving the dual of the primary model. The dual formulation of the primary model would achieve the optimal utility with minimum total costs, which would direct capital and operation costs. 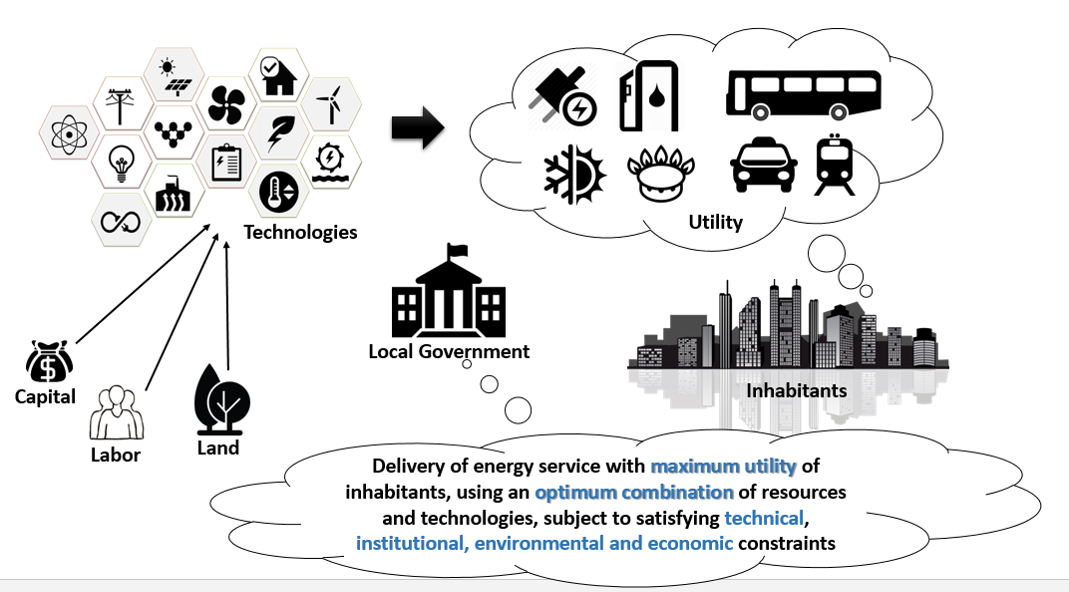 The level of segregation is usually determined by the ability to introduce the number of end-users and different technologies which are used to operate the flow of energy from the resource level to the end-use level as shown in the following figure. 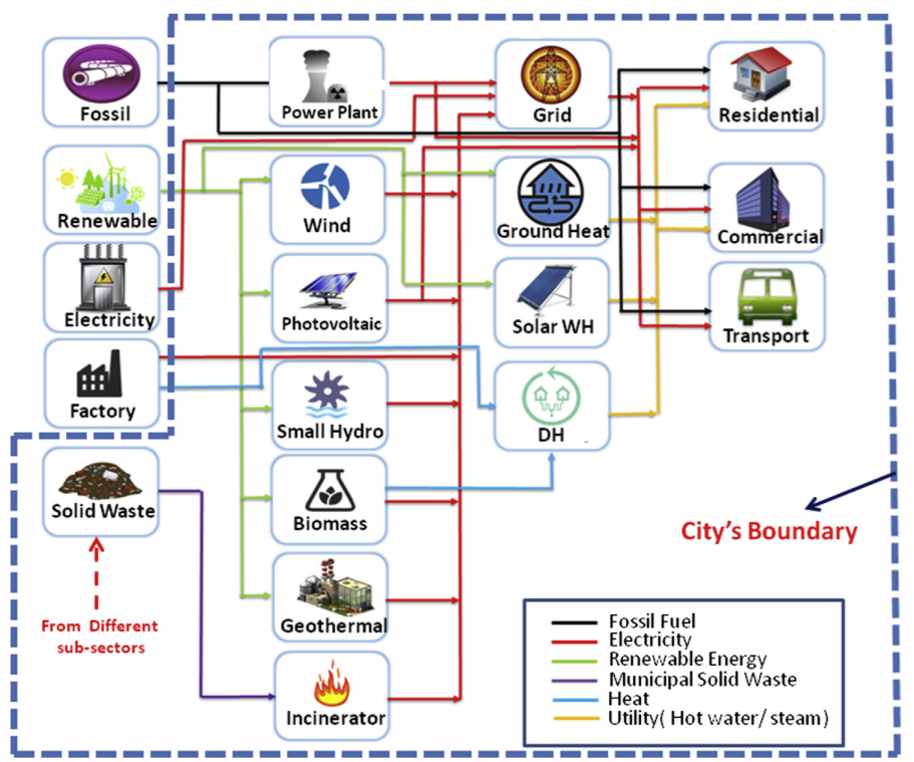 The bottom-up optimization-based model is implemented as a mixed integer-linear programming problem using the General Algebraic Modeling System (GAMS) to find the minimum total cost of delivering a certain level of energy service through the optimal combination of available technologies and resources in the urban energy system.

A city-level CGE model has been developed on the basis of the general equilibrium theory. It uses actual economic data from a Social Accounting Matrix (SAM) which is an accounting framework that reflects the circular flow of city’s economic activity to estimate how a city might react to changes in clean energy policies. In this model, the expenditures and savings are the primary inputs to the subsequent analysis of macroeconomic effects on income, employment, and output. Here in the production function, Leontief model is employed for intermediate input structure and Cobb-Douglas model for inputs of capital and labor, and constant returns to scale is expected. Industrial behaviors are formulated as being cost minimizing to production amount. On consumption side, on the other hand, households are divided into two; urban and rural, and they behave in order to maximize their utilities under budget constraints. This model employs Cobb-Douglas theory for household utility function. 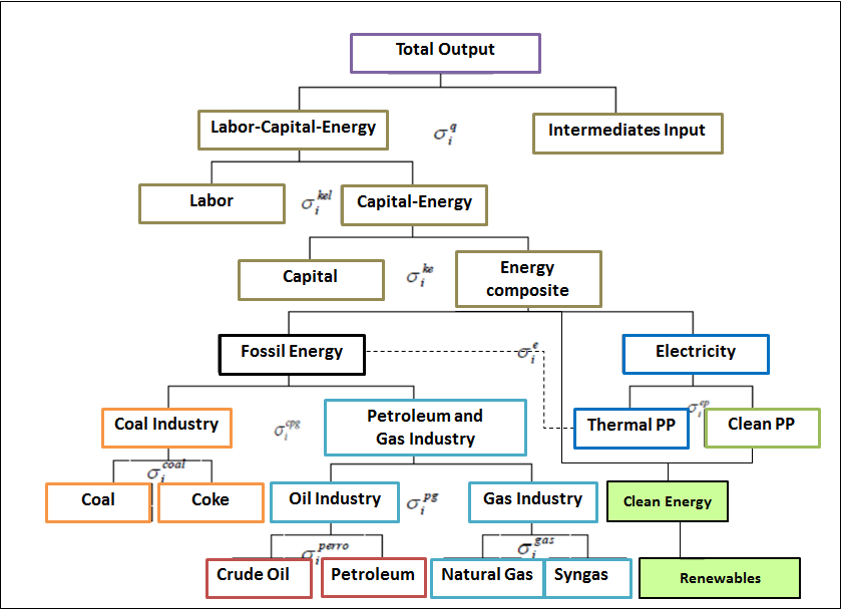 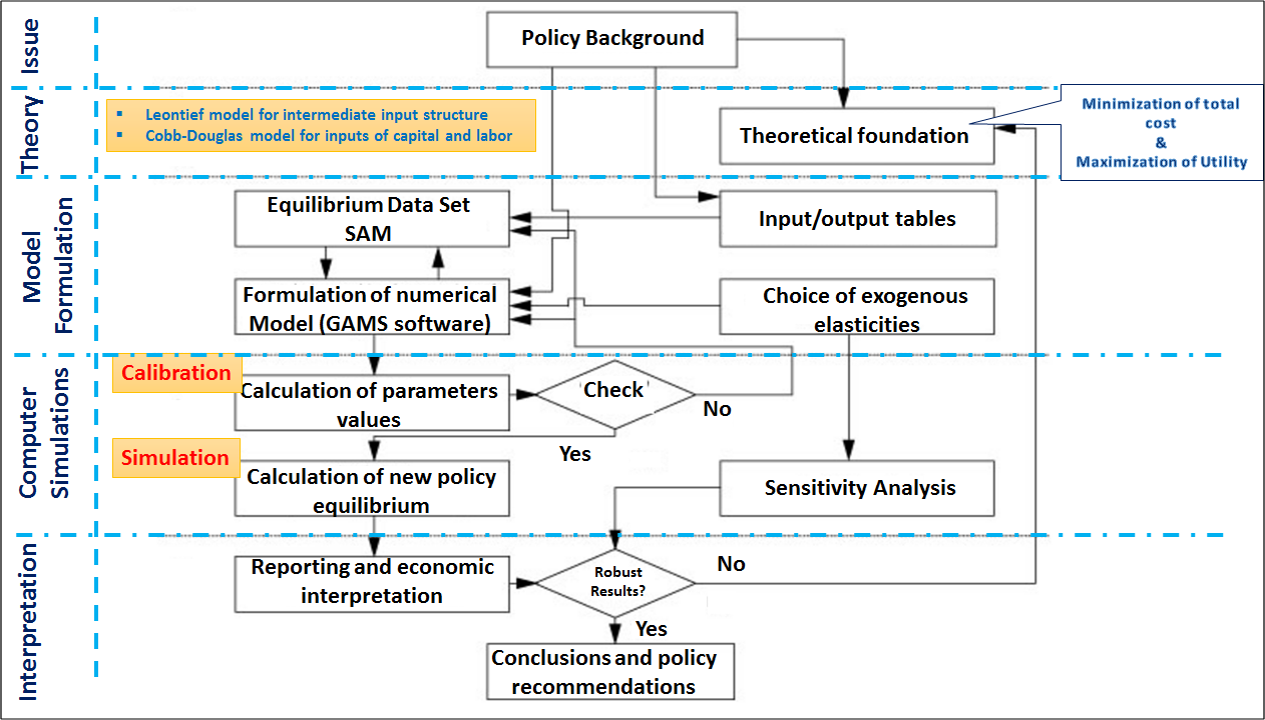 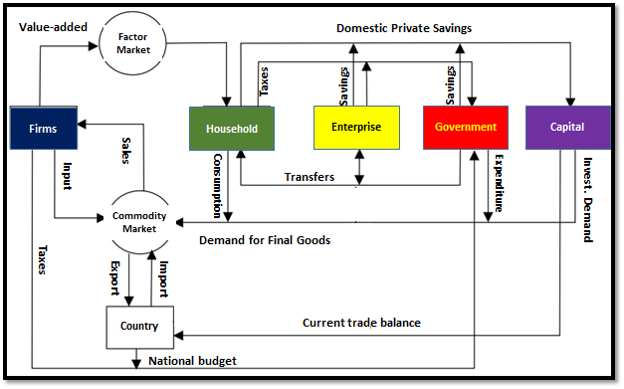 Assessing the public health benefits of clean energy development in the selected cities would be possible through selecting of Concentration-Response (C-R) functions. For most of the health effects include premature mortality and exacerbation of health conditions such as asthma, respiratory disease, and heart disease, a variety of alternative C-R functions have been collected from epidemiological research. In this model, using the Source-Receptor Transfer Matrix (SRTM) enables us to evaluate the effects of avoided emissions of PM, SOx and NOx (e.g. in units of tons) on their concentrations (e.g. in units of μg/m3 or ppm). The SRTM is a reduced-form model based on a standard Lagrangina dispersion model designed for short-range (up to 10 kilometers) dispersion in selected areas (i.e. road transport, waste disposal site, etc.). The C-R functions will be used to link the estimated changes in concentrations to a number of health endpoints. Finally, economic values for each health effect will be derived from economic literature, and will be carefully matched to the types of avoided health effects estimated in this analysis. Following shows the application of the model to the case of Delhi, India. 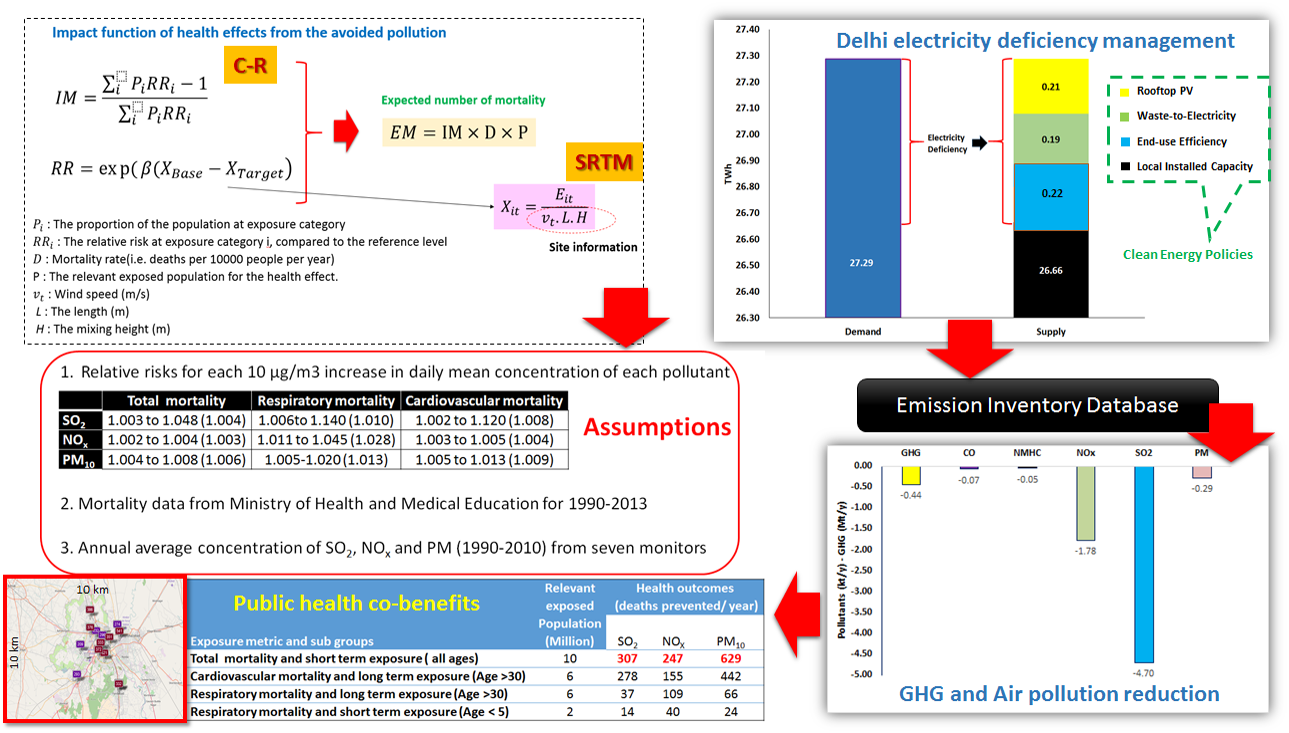